Mammoth Team Members Save Family Dog and Home During Fire

The pair immediately ran to the home, where they found all the doors to be locked. They could see the house was filled with smoke and saw the family’s mini Goldendoodle, 12-year old Bella, distressed, at the back door. Lindy dialed 911 while Beerbower jumped through a window to save Bella. 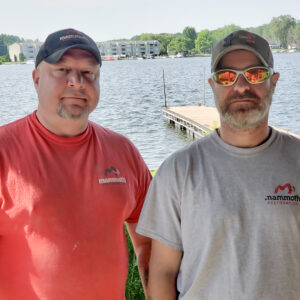 Once Bella was in a neighbor’s arms, they quickly went back into the home. They found flames shooting out of an upstairs bedroom and knew they had to make sure everyone was out of the house. Going up the smoke and fire-filled stairway, Beerbower discovered mineral spirits, an accelerant on the steps. He was able to remove the bottle out of the reach of the flames, avoiding an explosive situation. They quickly determined that no one was home, and firefighters arrived minutes later.

Homeowners, Ed and Judy Sabarese were not home at the time of the fire. However, Ed credits Lindy and Beerbower both with saving their beloved Bella, and very likely, saving their home by removing the accelerant. Sabarese says, “They are pretty special guys. They called 911 and went up a fire-filled staircase to make sure we were okay.” Matt Lindy says, “I’m just glad we noticed the smoke when we did. The damage could have been much worse.” Randy Beerbower says, “We just want to help people. Yes, we repair homes damaged by fire, but it’s even more important to save lives and properties.”

Having a service heart is the most important trait Mammoth Restoration looks for when hiring. Matt Lindy and Randy Beerbower exemplify that service heart. According to Erie Area Manager, Kyle Rishell, “I’m pretty freaking proud of these guys. They truly care about people and risked their safety to save a life.” Ed Sabarese echoed this and says, “We truly appreciate what they did and how they handled everything. We are grateful.”

Both Matt and Randy were uncomfortable with the public recognition from this as they felt that it was just the “Right  Thing To Do,” but this is something that we couldn’t help but celebrate.  At Mammoth Restoration, we are incredibly proud of not only what they’ve done but equally impressed with their humbleness and the reason behind what they did.

Last year we set out on a strategic initiative to get more done with less. In order to do that,... Read More

We’re incredibly proud to have Alex as a Team Member. He’s been with Mammoth for 6 years has proven incredibly... Read More